Ever experienced total silence or absolute darkness? The holiday cottage farm is situated on a hillside, in the wilderness of the Black Mountains part of the Brecon Beacons, South Wales on the border of England and Wales. The setting is completely isolated, with not a neighbour in sight, yet is less than 3 hours from London. There's a good Co-Op in Hay-on-Wye, seven miles away, and both Waitrose and Tesco can deliver to the house. The nearest (and best) pub is a hard three mile walk, or another is four miles by car.

Activities such as riding, canoeing, rock climbing,  gorge walking, fishing, cycling and clay shooting are all available within a few miles. Hay-on-Wye is famous for its many bookshops and the annual, literary Hay Festival in May.  If you would prefer not to travel but still  do something fun and exciting then why not book a Team Challenge that you can all do right here. 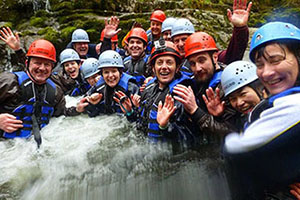 The Llanthony Valley is a place of magical beauty, history and religion, in the Black Mountains to the north of Abergavenny.

Its 'U' shaped section was created by glacial action many thousands of years ago. The river Honddu rises at the Gospel Pass and flows from Capel-y-ffin down to Llanvihangel Crucorney where a glacial moraine deflects it north-eastwards to join the Monnow at Alltyrynys. Offa's Dyke Path, near the old Anglo-Saxon boundary between Wales and England, runs along the eastern ridge, between the Llanthony and Olchon valleys. In Medieval times, when the churches and priory were built, it was difficult to enter the valley at the southern end as it was thickly wooded and boggy. The early religious settlers and farmers entered the valley from the north, over the Gospel Pass from Hay, or walked across the mountains from Grwyne Fawr or Longtown.